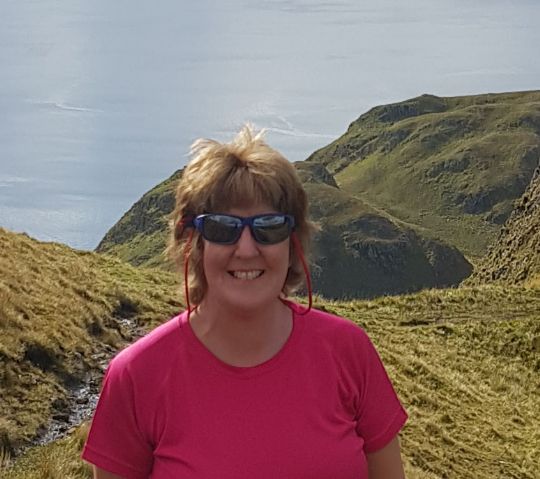 Originally from Cheshire I have lived in Scotland since 1983.  My career is in Landscape Architecture and I continue to work as a Chartered Landscape Architect in the public sector.  However, in my spare time I pursue my interest in batik painting.

I first discovered the art form of batik painting whilst on a cycling holiday on the Isle of Islay in 2001, when I attended Elizabeth Sykes’s batik workshop at her studio at Bridgend.  Since then I have been hooked on batik painting; became a member of the Scottish Batik Guild and have attended their annual workshops at Strontian since 2007.

I particularly like the distinctive character of batik with its pattern of fine lines in which the wax is infiltrated with coloured dyes.  I also enjoy the unpredictability of the medium as you never quite know how the batiks will turn out.  I initially used silk and have experimented with paper, but nowadays prefer to use Primissima cotton mainly due to the very vibrant colours that can be achieved.

Inspiration for my work mainly comes from Scottish landscapes including my home town of Edinburgh, but I also have a love of nature, wildlife and birds.  I work from my own photographs usually taken whilst on holiday at various locations in Scotland.

I have exhibited and sold my original batik paintings as part of the Scottish Batik Guild annual exhibitions which have taken place at various locations including Glasgow Botanic Gardens (2009), Percy House Gallery, Cockermouth (2009) and Resipole Studios, Acharacle, Argyll (2013, 2015, 2017 & 2020).  I have also exhibited at Dancing Light Gallery, Whitmuir (2016); at Stick Factory, Edinburgh (2016); for the RSPB at Rozelle House Galleries, Ayr (2016) and at Birch Tree Gallery, Dundas Street, Edinburgh (2018).  The Scottish Parliament used my ‘Scottish Parliament in Winter’ batik painting as one of their official Christmas cards during 2014, 2015 & 2016.  I’ve also had a stall at a few craft fairs, including at CVE Art in the Park, Colinton, Edinburgh in 2018 and at the 3D2D Christmas Art, Craft & Design Fair at the Assembly Rooms, Edinburgh in 2019.

I sell my handmade cards and mounted giclee prints at various outlets in Edinburgh & the Lothians and also from my website.  I have also recently diversified my product range to include mugs, coasters, fridge magnets and notebooks.

For more information please visit my website at www.dmbatikart.co.uk. Edinburgh Castle in the Snow The Meadows in Spring