You are here: Batik Guild Batik Batik in China

Batik in China and South-east Asia

There is a long history of batik production in China, dating back to the sixth century. Nowadays the tradition of batik is still practised by the minority groups - the Miao, Bouyei and Gejia who live mainly in Yunnan and Guizhou provinces in south western China. And as some of these people (particularly the Miao) have been migrating out of China and into the neighbouring countries of Vietnam, Thailand, and Laos, since the 18th and 19th centuries, their traditional textiles including batik can also be found there. When they live outside of China, the Miao people are known as the H'mong - they are the same people.

From the late 1970's onward many H'mong families from Laos were resettled in the West especially in the USA, after they sided with the Americans and against the Pathet Lao in the Vietnam War. There are H'mong communities nowadays mostly in California, Minnesota and Wisconsin and some of them continue to batik!

All the minority people place great emphasis on their traditional dress which can help outsiders distinguish them from each other, and their costumes include elements of batik. 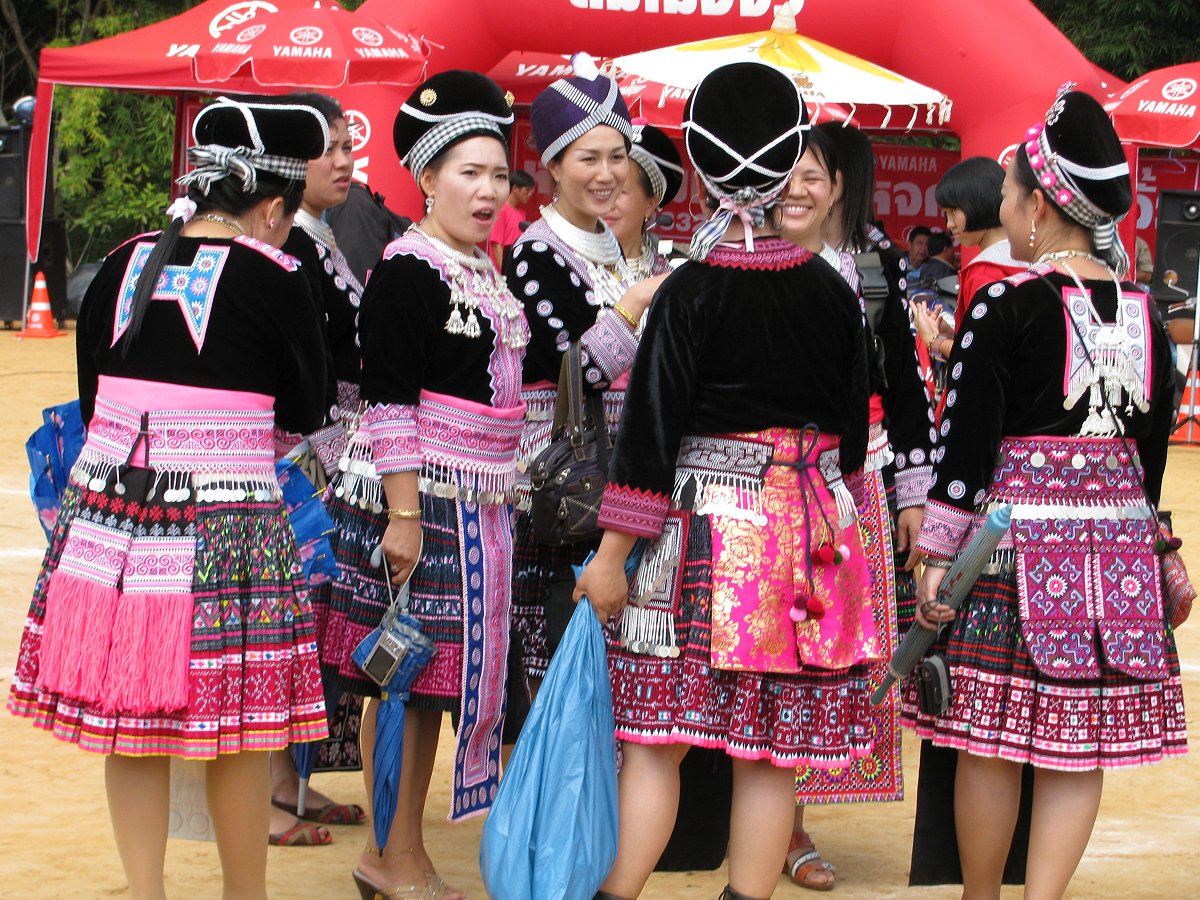 Hemp and cotton is waxed usually with beeswax and dyed with a strong natural indigo to produce a very deep blue. Indigo dyeing is widespread throughout the area and there is great expertise in producing the indigo paste from the leaves, and dyeing the cloth. Girls traditionally start learning to embroider, dye with indigo and to produce batik from the age of 6 and 7 years. However many of these textile skills are slowly dying out as printed imitations of batik synthetic dyes, and machine embroidered cloths have been introduced. 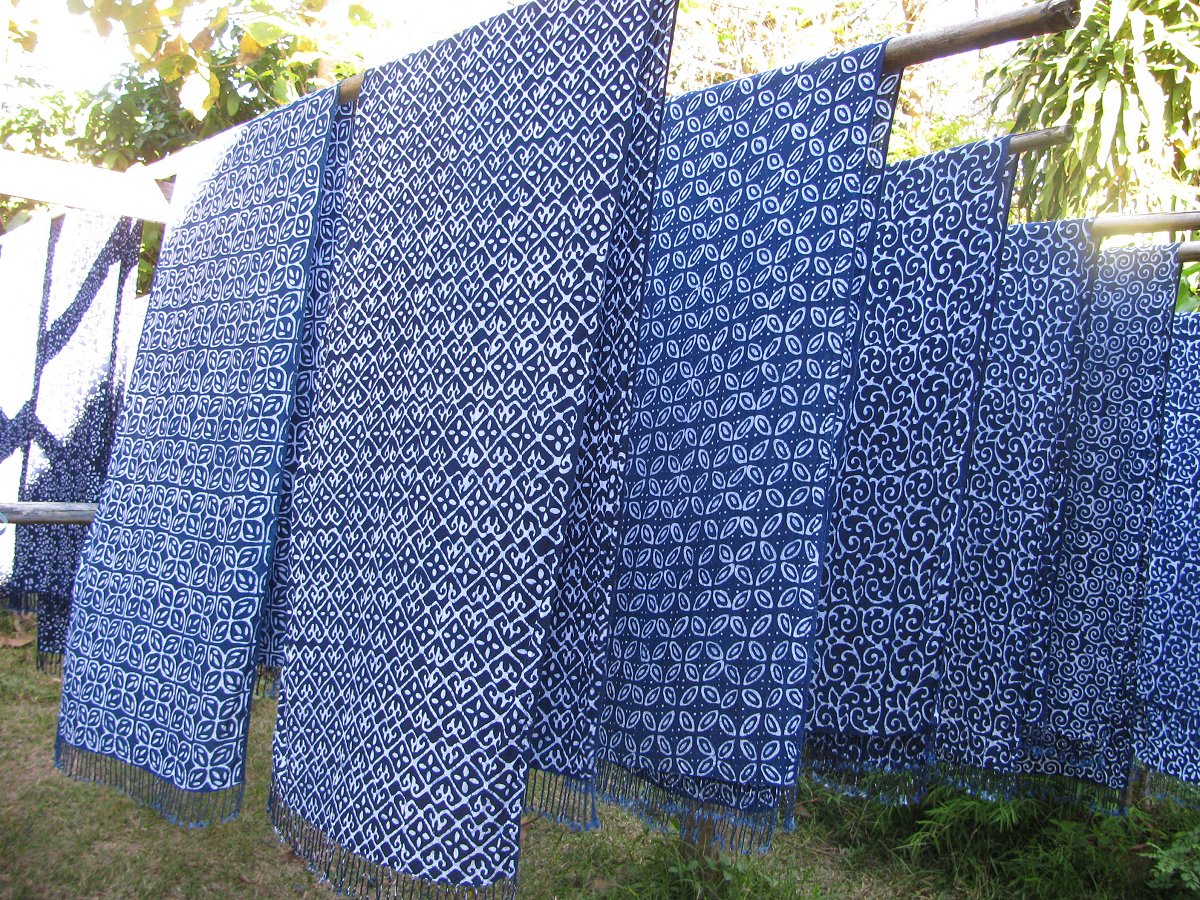 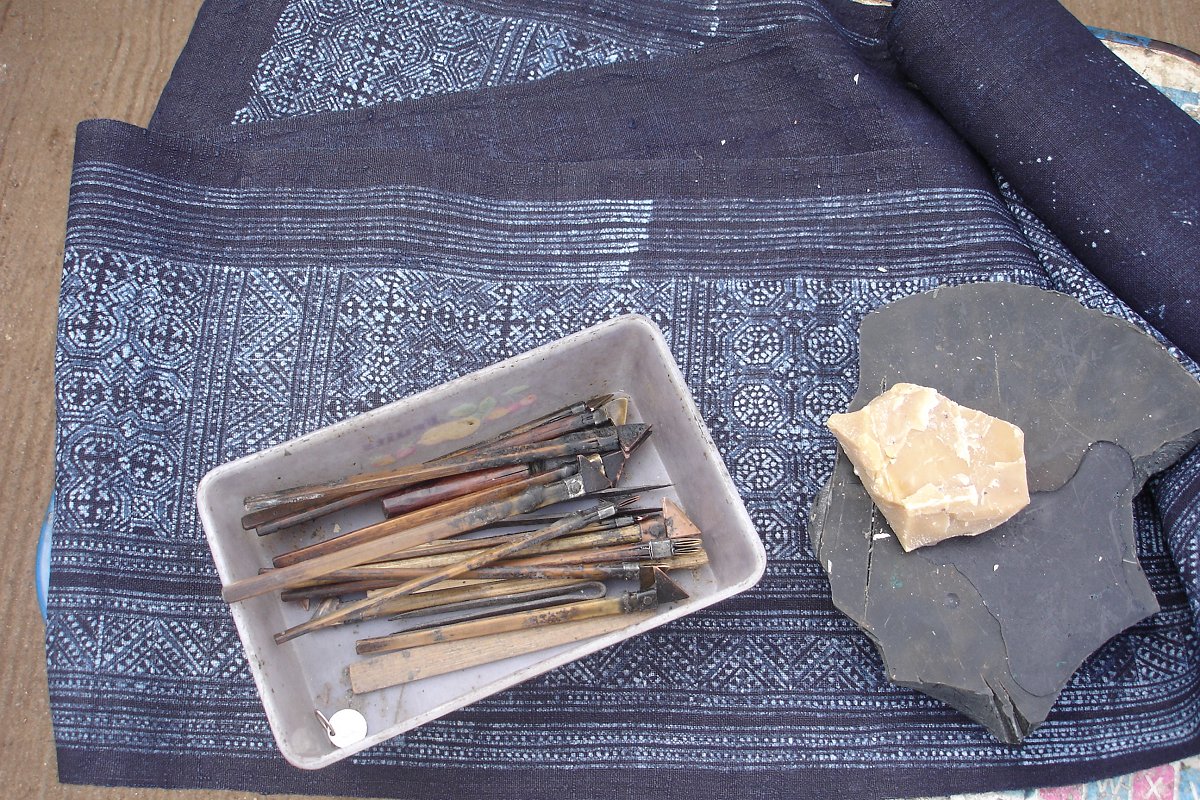 The beeswax is usually heated in a little pot, resting in the hot embers of a wood fire and the tools for applying wax are called “ladao” These are made from 2 small triangular pieces of metal (originally many were made from old copper pennies) and their apexes are bound to a bamboo holder with copper wire. The ladao tool lends itself to drawing straight or slightly curving lines. The cloth is laid flat on a board and the pen dipped into the wax like a nib pen. 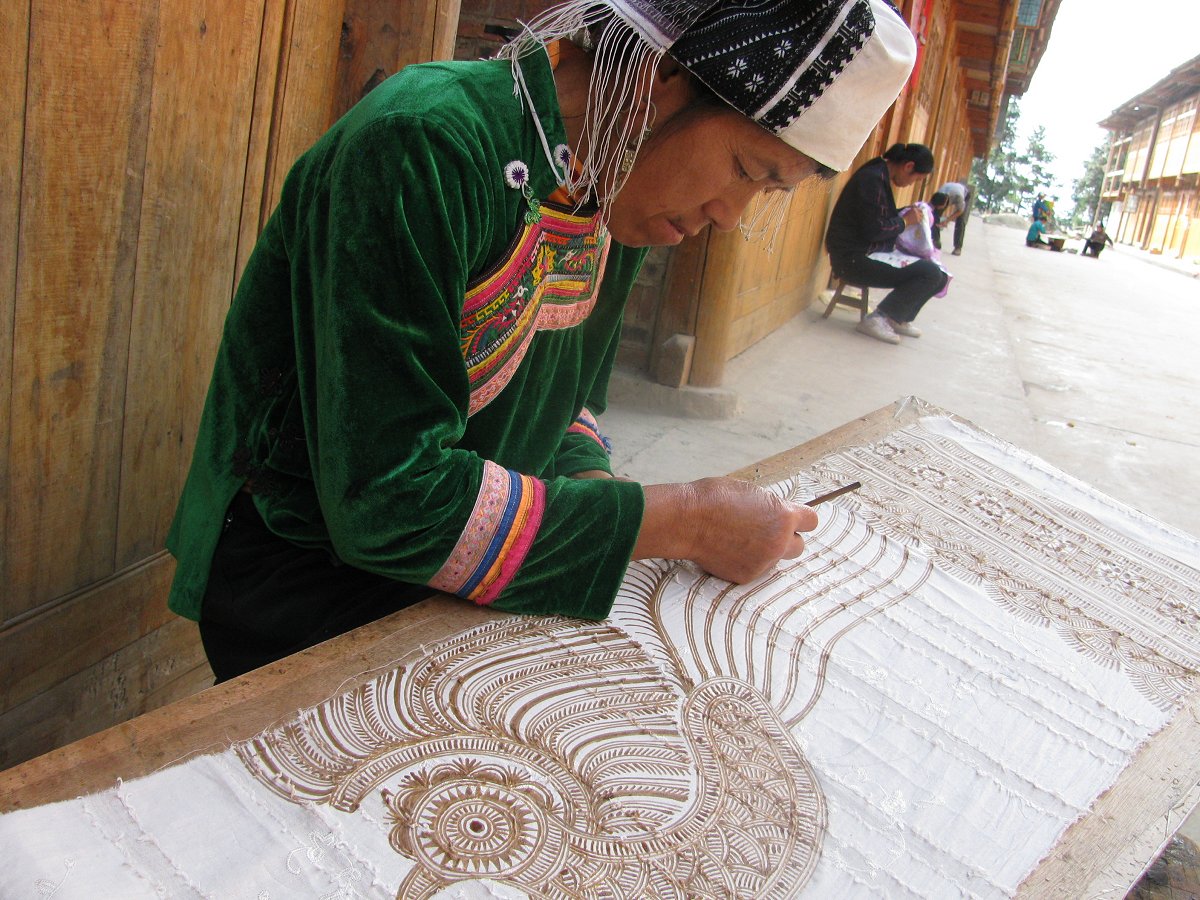 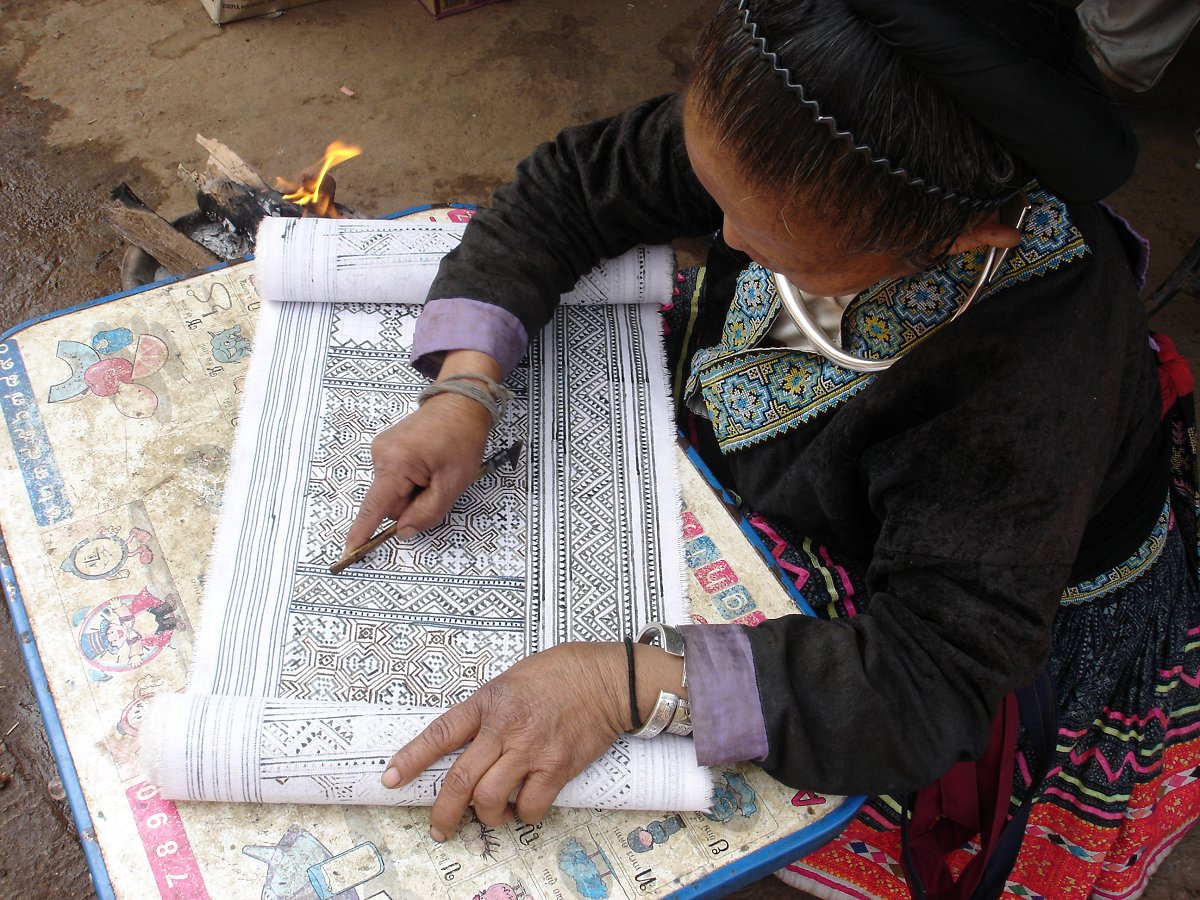 Waxing cotton with a ladao, Thailand

The designs are mostly geometric and traditional and redolent with symbolism such as double spiral designs.  The most exquisite work is very fine indeed with tiny fine blue lines on a white background.

Other tools used for patterning are finely split bamboo, and metal stamps. In northern Thailand, for example, H'mong women generate an income from their batik, and here metal stamps are used to stamp the design onto the cloth in wax. It's then dyed in traditional indigo dye and made into table cloths, cushion covers, and clothes.

Batik is used mainly on the cloth carriers made for babies to be carried in, on jacket sleeves and most importantly for many of the Miao, as panels in the women’s’ magnificent pleated skirts. These ‘migration’ skirts tell the story of their ancestors’ journeys from the river valleys of Central China  5,000 years ago. The patterns on the skirts represent the landscape they passed through, and the rivers they crossed. 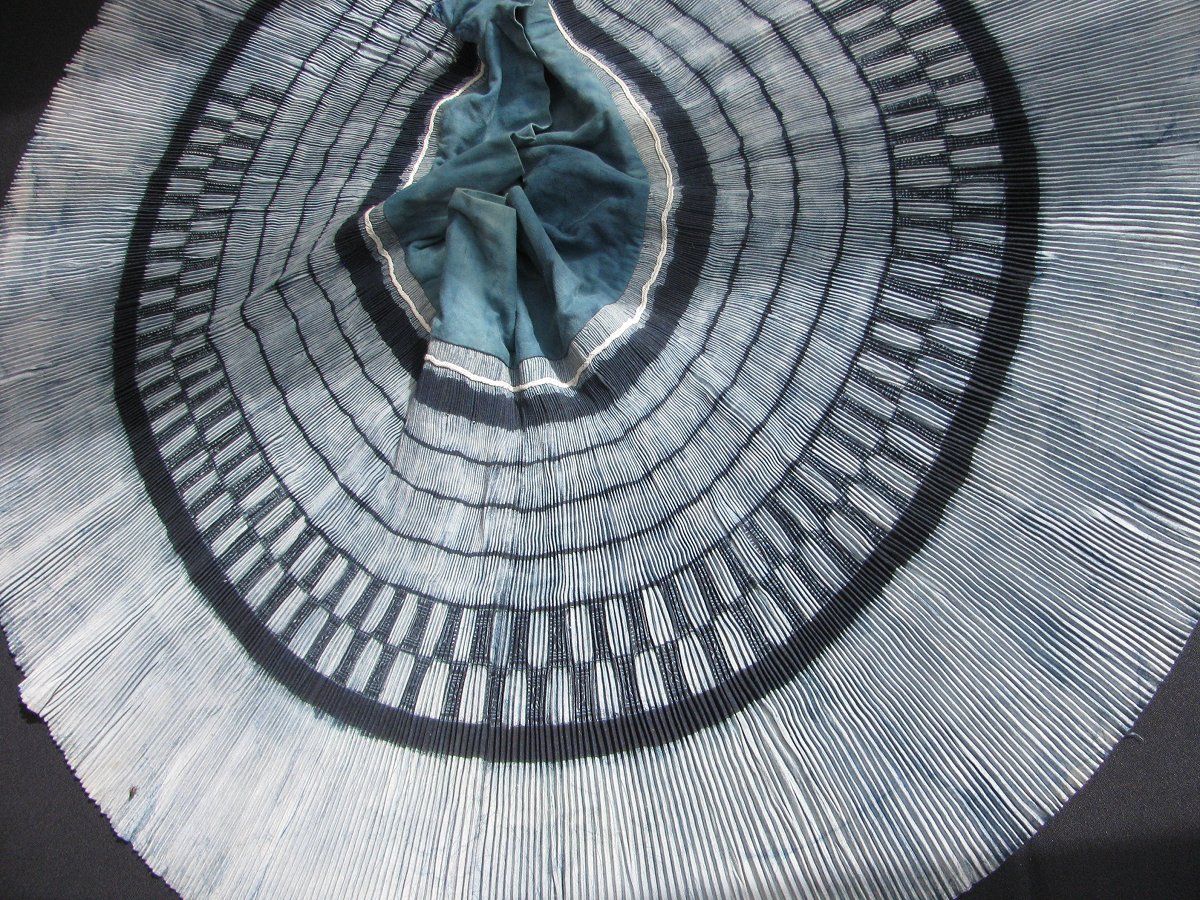 The long clan banners of the Miao from Rongjiang, in southeastern Guizhou tell their individual clan mythological stories, using flora and fauna motifs which have a long history of representing their heroic ancestors.

In Thailand, in the northern town of Phrae, a distinct batik tradition has developed in a people who came originally from Laos bringing their indigo producing and dyeing skills with them. Traditionally they have always made “mah hom” deep blue cloth made into tough and resilient garments for northern rice farmers. In the past few years village families have begun to produce batik, mostly for clothing, using woodblocks made from the teak wood which is cultivated and carved in the area. 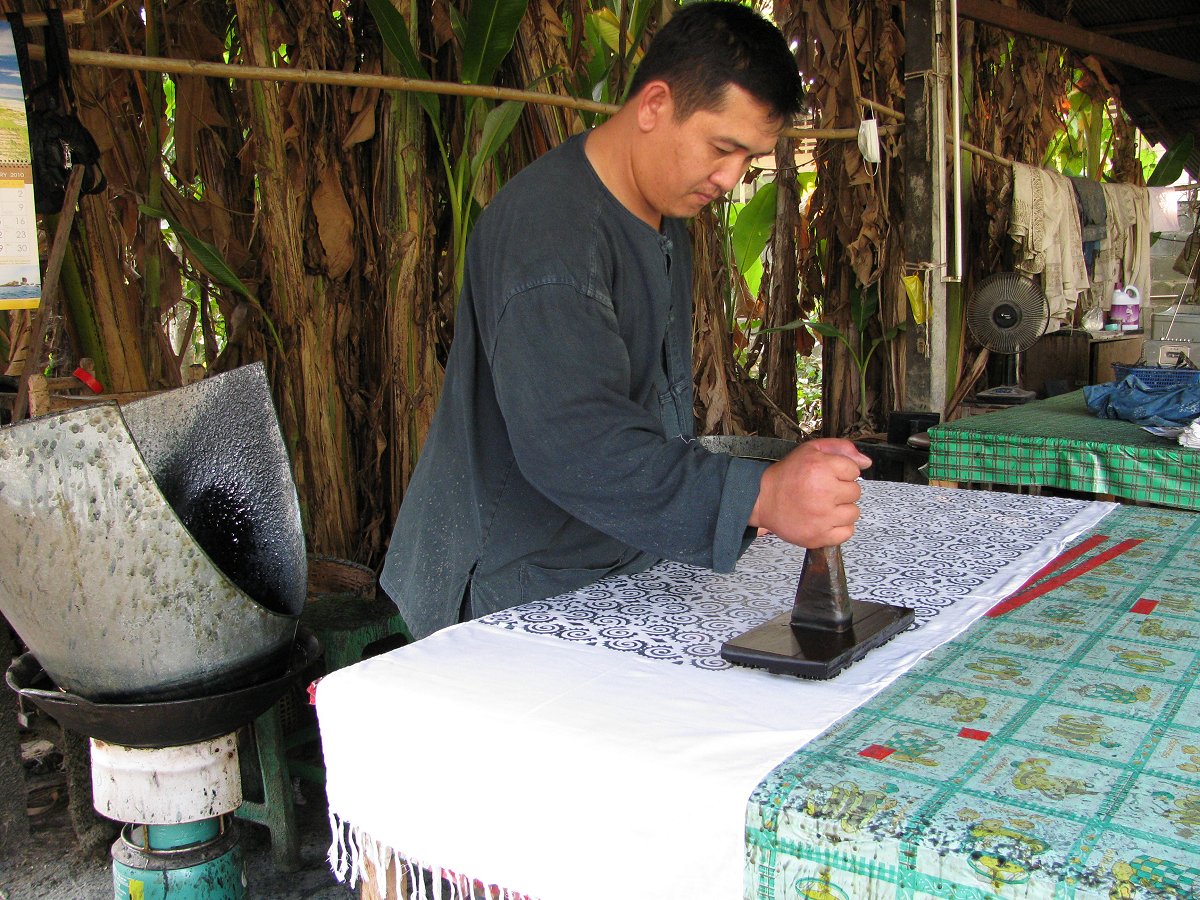